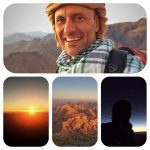 I am back and safe in Cairo.

48 hours ago I was on the fence about accompanying one of the people here, Jodi to Climb Mt. Sinai. Honestly I had not even registered that Mt. Siani was in Egypt for some reason I thought it was in Israel. It’s in Egypt and two hours from the Israeli border. I had a couple of concerns. One, It’s an 8 hour drive there and another 8 back and two, I was under the impression that South Sinai region is listed as off limits to U.S personel. I asked around and a couple of tour guides said it was safe, that there were a few checkpoints to get through, that’s all, and one person said it’s in the East Siani.. so “no worries”. I thought to myself, look what are you going to do in Cairo for the next two days before your flight home, sit around? It’s Mt. Siani!!! I said “yes”

We got one more traveler to tag along, Nathan from Los Angeles (lives in S.M, I know small world) and we set off around 6AM. We crossed under the Suiz Canal and came up on our first checkout point. No problems. Went through with no issues. Then another checkpoint, then another, then another…. there were 10-11 checkpoints all together and somewhere around the 5th checkpoint something didn’t seem right. Before getting to this checkpoint I saw a Reuters IM on my phone saying a Russian Airliner had gone down…. where? In the Siani region. As we traveled this road all we saw was one desolate beach resort after another, where are all the people? At the 5th checkpoint there was a 30 min. wait. Our driver did not speak english so we we’re in the dark about what may be going on. Then after 30 min. we were told we could proceed but one of their military cars would follow us to the next checkpoint. So by now we were a bit nervous. I started dropping pins on my iPhone Maps and notices that each location was identified as “South Siani”. Next checkpoint a one hour wait. The gradual environment seem to get more militarized and tribal as we moved forward. We were only about an hour away and connected with a Mexican Tour bus who had its own security on board. Looking back at it the reason we got the attention and extra security going through the region was most likely from what had happened a couple of months ago with the Mexican Bus that was accidentally shot up by the Egyptian military. The Southern Siani is mainly populated by Bedouin tribes which at first site can be a bit intimidating since all we’ve seen in western media is how anyone with a turban must somehow be associated with terrorists.

After settling in our anxieties went up again as Nathan show’d me another news updated from Reuters this one stating that ISIS had claimed responsibility for the downed Russian plane. Which means if true, ISIS is in the region. Ok, by now I just wanted to go up the mountain, down the mountain and get the **** back to Cairo.

Upon our arrival at Saint Katherine Protectorate where Mt. Siani is there was a sense of calm as there were military vehicles at both ends of the area. We settled at a place called “Fox Camp” which is less then a quarter of a mile from the start of the trek up the mountain. We were met by the tourist police and asked some questions and got our rooms to rest. We arrived at camp around 7pm and the hike up the mountain was to begin at 12:00AM.

After settling in our anxieties went up again as Nathan show’d me another news updated from Reuters this one stating that ISIS had claimed responsibility for the downed Russian plane. Which means if true, ISIS is in the region. Ok, by now I just wanted to go up the mountain, down the mountain and get the **** back to Cairo.

Taking a deep breath we met at community hall for dinner, which was excellent and I have to tell from this point on every encounter I/We had with the bedouins we were staying with was simply generous, trusting and kind. Once you are in their space, you are welcomes with open arms. The bedouins who guide you up Mt. Siani are from a tribe called “Jubalia” a small honorable and kind people. After dinner we met at an outside tent for some tea. Jodi and Nathan took off, I stayed and chatted (yes they speak English) with them for a bit longer…. laughing and really having a great time. Around 9:30PM i went to my room, shut my eyes and slept until 11:45PM.

To venture into the unknown is where we are met with the insights and clarity of what life wants to give and communicate to us.

At 12:00AM we met our bedouin guide, “Mousa” who was going to take us up and made our way to the foot of St. Catherine’s cathedral to basecamp for the trek. There was the Spanish group in front of us, about 20 of them and then us. The night was brisk, temperatures very cold and as you move up the colder it got. It’s 14 Kilometers there and back. Most people take 3-4 hours to get to the top and 2-3 hours to get back. The goal is to setout in the middle of the night so you can see the amazing sunrise as day breaks. So as many of you know I’ve been hiking regularly for a couple of years now and I believe it was all in preparation for this hike. As we moved forward the night became darker, the stars bright and the silence more resonant. Along the path there are 5-6 resting areas, most if not all of these were closed. Along the path about almost 2 hours into the trek a cat started following us and Mousa told us that this cat comes and hikes with some hikers up to one of the last camps before the 700 steps. The 700 steps are steps that the greeks built to overcome the extreme incline of the last quarter of the hike leading to the peak of the mountain. Mousa had a key for this rest stop and we rested there for almost an hour as we had made really good time and to be up at the top too early would not be a good idea because of the cold. The cats name is “Amira” yes that’s correct and she has a litter of 4 who also live with her at this rest stop. Before getting to the last rest stop she must of hiked with us for 15 minutes and when we went in, it was like we were being invited to her place (see picture of me with Amira’s photo bomb)

at 3:30AM we started towards the 700 steps and as I started to climb them, it dawned on me that over 2 weeks ago I had no plans on doing this but yet here I was. I realized there was fear filled terrain with the 8 hour drive, some time waiting in patience at the checkpoints but continuing to move forward and then the story started to come to me. To venture into the unknown is where we are met with the insights and clarity of what life wants to give and communicate to us. I’m really glad Jodi asked me without pushing me to join her on this journey. When going through the checkpoints and finding out info about the flight that went down etc… i was asking myself what was i doing here but honestly i just needed to move forward a little bit more for the story to come to me. This trip has been amazing of course on many fronts. Meeting my beautiful family for the first time after all these years, Egypt and all its glory but it wasn’t until the steps where i realized that it’s ok to not know why things happen, where things are, what will happen, etc.. that we get little messenger like Jodi who say hey come this way… and even though there was fear a bigger part of me said “Oh my God, i get a chance to go up the mountain that Moses retreated to” You see there is nothing different about Mt. Siani then any other mountain. The reason it’s holy is because of the intention, spiritual heart and desire of a man who follow’d his heart. He left his family for years to go do what he believe was asked of him. The story was murky for Moses when he was climbing and please I’m not comparing myself or anyone else with him. But why do people come all this way, go through all these checkpoints to follow in his footsteps. When man follows his heart and moves forward in his journey above all outside things that we believe we need in order to be happy, on this human experience, others are inspired… people are changed and sometimes history is made.

At the top of the mountain there is one more resting area and after that the last bastion of steps about 10 min. worth that lead to the absolute tip of Mt. Siani. We had passed the other group right at the begging and even with our earlier rest they were still behind us. I decided to go on my own to the top and spend 20 minutes meditating, then opening my eyes to take in the sea of stars. It was so silent, so full of an experience. I stayed as long as I could before it became too cold and then made my way back down to the rest area. Within 15 min. the other travelers starting coming and we all made our way to view the sunrise.

On our drive back the Egyptian government actually put a security personal in our vehicle, heavily armed and it did not feel as scary going back.

My experience here is complete. Tomorrow morning I leave to come home.