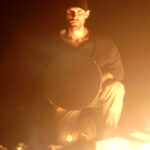 I like to call it “The Old Way” – which is nothing more than a method of training to develop certain capacities inherent in human beings.

This is what makes “Shamanism” – a Tungistic / Altaic word from Northern Asia meaning Knower or Practitioner – universally descriptive.

Yes, there are possibly hundreds of thousands of cultural variations, extending from our earliest archeological records of human spirituality manifest in abstract bone arrangements made in cave burials to the “altered state” induced by pedantic liturgy in the Roman Catholic Church.

Nevertheless, the commonality present amongst Neopagan Tengri deer ceremonialists in Siberian Mongolia who have day jobs as auto mechanics and, say, 10th Century Viking Berserkers is the ability to enter and maintain attention, focus and mobility within the altered state.

What is the altered state?

I am not merely being playful. We need to demystify things. The shaman’s mask is not an invitation to overcomplicate the primitive nature of storytelling. It is simply a badge representing hard earned self-awareness; not much different than an Army Colonel’s silver eagle.

Perhaps the specific difference between “Shamanism” and Miles Davis, Higher Order Mathematics and 10th Century Warriors is that Shamans are doctors of a wild breed. Typical shamanic skillsets range from theater and storytelling, friendship and advice-giving, to the mastery of plants and intoxicants and on towards searching the limits of the body in painful techniques such as bone manipulation and near-death fasting, perhaps even entering the realms of mortal self-sacrifice.

The lessons learned in the shaman’s search for her limits of awareness are then used to cure in service of the community. Or, as any knowledge can be utilized for ego, to destroy. Though, as always, the fallen shaman loses the ability to wear the mask—a right granted by the community’s trust—as the brazen Colonel will be denied the General’s star.

All to say, shamans are explorers of human potential in the exact same way mathematicians, astronauts, technologists, athletes, scientists and artists are. The common weaving of human disciplines is mastery of abstract states of consciousness—altered states (ask Heidegger). And what makes the term “Shaman” unique to Medicine Men and Women is vocational tool kit which presses both into the razor’s edge of human spirituality and equally into the art of simple, mundane living.