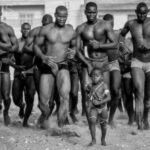 Many come to men’s work with wounds inflicted upon them by the masculine, specifically a father wound. They come to this work to heal such wounds and alchemize their relationship with the masculine. The journey to healing this wound is unique for each man, and it starts by trusting our masculine containers for our feminine physical, emotional, sexual, and cosmic bodies. Can the masculine be trusted again after such a father wound or betrayal by the masculine? Can I lean into and trust the masculine leadership of other men? Before we can trust outside masculine containers, we have to come to terms with securing and being in the right relationship with our own masculinity. First, look within. Where does such toxicity live within yourself? Where are you unconscious in how you show up for yourself or others? Do you trust yourself? If you don’t, restoring the relationship to the external masculine will be almost impossible.

Missing or absent fathers inflict the first cut by the masculine. This father wound is the first betrayal most children face in the hands of the unconscious masculine, aka “toxic masculine.” When a child needs to feel safe, seen, and protected by his father, he is confused with nothing to lean against. He is now fearful, afloat on a flimsy raft in the turbulent oceans of life.

When fear is present in a young man’s life, it becomes a part of all of their decision-making. It paints every action. It alienates boys to see life through the prism of the only one who’s there – their mother. Boys need men. They need to feel the presence of their father in their lives. They need to feel and see life through the prism of both their father and their mother. The more toxicity a man carries from his wounds, the more his relationship with the masculine outside of his own life deteriorates. Later, as an adult, the young man must go back and “re-father” himself in the areas where he was dropped or wounded by his father. (Father wounds are those inflicted by the masculine. Some examples are violence, physical/emotional absence, unconscious behavior, and sexual abuse.)

Our higher self (or “conscious masculine”) appears for most men when they begin doing men’s work. Through this work, they revisit the moments of being dropped so they can shepherd themselves toward healing. When we, as men, show up this way, we begin to heal. And, as healing happens, we look outwards to others who hold and live by similar principles. We start to trust other masculine beings and change our relationship with the masculine collective. This process of facing internal toxicity by leaning on other conscious masculine men heals and transforms the face of masculinity in our society.

Here are a few suggestions for fathers, take what resonates and even add your own suggestions in the comments section.

– Be physically near them
– Have “do nothing time” be in the room where they are playing and be off your phone without interrupting their play
– Have them experience you around your peers (be selective with who you surround yourself with)
– Have them help you fix things around the house
– Take them for a hike where you walk in silence for a portion of the time
– Buy them less things and give them more experiences
– Limit their screen time
– Reframe boredom as the starting point of their magnificent imagination
– Let them experience the value of one’s attention by how you use yours
– Don’t save them, let them scrape their knee in their exploration and engagement with life
– Live by example for they are witnessing and watching you every second of every day